A unique one-day event. On the 23rd of October 2022, Forte Ardietti will be the setting for an historical re-enactment.

A day to relive the history of the Italian Risorgimento, with costumed figures, faithful reproductions of royalty and fight scenes.

Within the walls of the fort the Italian troops and the Austrian platoon will clash again.

Forte Ardietti rises on the borders between the territories of Ponti sul Mincio (MN) and Peschiera del Garda (VR).

The town of Ponti sul Mincio is located not far from Lake Garda, on the morainic hills. It can also be reached by bike along the beautiful cycle-pedestrian path that runs along the Mincio river.

Ponti sul Mincio and in particular its Scaliger Castle are worth a visit during your stay on Lake Garda.

From the charming farmhouses scattered around the fields, to the small houses in front of the ancient Castle, in Ponti you can breathe cordiality and tradition. Reason for which, the municipality has been awarded with the prestigious Orange Flag, a recognition by the Italian Touring Club.

Before going into the details of the event, let’s delve into the history of this place to visit near Lake Garda.

The fort is a small jewel hidden away from the typical paths on Lake Garda. It was established between 1856 and 1861, following the siege of Peschiera in the first war of independence.

Forte Ardietti is one of the 14 forts that were built to protect the territory and more specifically Peschiera. Why all this protection?

In 1848, when the Savoy advance managed to conquer the fortified stronghold, the risk of a subsequent fall of Verona was imminent. To avoid this, the Habsburg Empire, having reconquered Peschiera, created a new and stronger defensive system:

The Austrian Quadrilatero which includes Peschiera, Verona, Mantua and Legnago.

This defensive system, ordered by Marshal Radetzly, involved the defensive potential of the river lines of the Mincio and Adige and those of the fortresses of Verona, Legnago, Mantua and Peschiera.

At the same time Peschiera was surrounded by 14 forts scattered over the surrounding morainic hills.

Among these, Forte Ardietti is one of the best preserved. It remained almost unchanged over time, apart for a few undergoing changes for subsequent uses. Even the least interested person cannot fail to be struck by the place, so unique in its kind that it cannot go unnoticed.

The construction of the Forte Ardietti can be divided into two stages. The first dates back to 1853–1859 when they dug the moat and built the Carnot and Caponiere walls. The second dates back to 1859–1861 when they built the central foyer. This made it one of the best equipped forts in the quadrilatero.

Now that we have deepened the history of this place to visit near Lake Garda, let’s get to the main news. Let’s see all the details of this event.

The festival starts on the evening of Friday 22 October with dinner at Fort Ardietti together with the reenactors. Simple traditional dishes cooked by the reenactors themselves for a special and unique experience.  The dinner must be booked in advance at a cost of 35 euro and includes a starter, first course, goulash and the typical “fogassin”.

When will you be able to dine with Garibaldi again? Places are limited, so hurry up!

The period of the Unification of Italy is punctuated by a thousand battles for liberation.

The Italian wars of independence, main episodes of the Risorgimento, involved the Garda territories between 1848 and 1866.

Let yourself enjoy this typical historical accurate immersive day, battalions framed in ranks will parade in the fast march typical of the armies of the early 19 century. Clashes and charges, firing platoons and assaults, duels and heroic deeds will follow. But not only that, you will be involved in dances and music within the walls of the Fort and will attend the training and guard stalking.

Visiting the fort in this day allows you to see and feel for yourself what life was like within its walls. The rooms and halls of Forte Ardietti will be equipped and restored to their ancient use, from the refreshment points to the dormitories or to the ammunition depot.

You can also attend to a formative moment to remember heroes that are close, but often too far away.

The costumes, the explosions and the smell of gunpowder… During the visit you will breathe the solemn atmosphere of the days that saw men fight for the universal ideals of freedom and independence. Past history will never seem so close to you.

How to participate in the historical re-enactment of Ponti sul Mincio?

To access the Fort, you need to buy an entrance ticket that will allow you to watch the entire re-enactment. Tickets are available for € 5 at the Peschiera del Garda infopoint.

Throughout the day the reenactors will parade and clash in the fort, so you can choose the time you prefer.

All you have to do is to go to the office and buy the ticket. Mark the date on your diary: October 23rd 2022, an appointment with history. 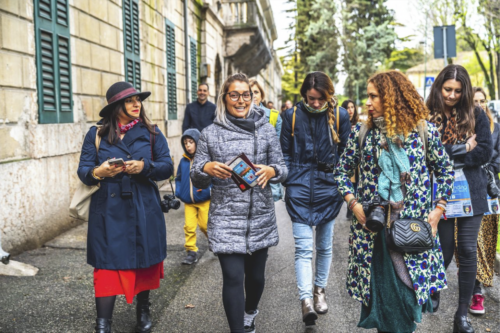