When I was walking through the alleys as a child and smelling the warm smell of chestnuts, I would feel like I was on cloud nine… That was the sign that one of my favourite days of the year was approaching, the celebration of St. Martino in Peschiera del Garda.

The 11th of November represents the exact day in which the town celebrates its Patron Saint, St Martino. Actually, the residents usually celebrate for at least three days. I think I have never seen so much joy on people’s faces as in this period of the year… Perhaps only on Christmas? In fact, there are many and unmissable traditions, some more ancient, some more recent, that fill the town streets with happiness every year.

Some examples are for sure the “Fire” of the Voltoni, the extraordinary opening of the Austrian Polveriera, the City Walls Tour… and of course, the Holy Mass celebrated in the homonymous church, located in Ferdinando di Savoia Square, the ancient Piazza d’Armi. I’m going to let you in on everything you can find in the alleyways of the centre of Peschiera during such an important event.

Many thinks that autumn isn’t the best season to walk through the places to visit on the Garda Lake. Actually, I think it’s a unique opportunity to appreciate the real essence of each of them.

…MUCH MORE THAN A SIMPLE FESTIVAL

The celebration of St Martino in Peschiera del Garda is often mistakenly considered as only a festival. There are certainly many aspects that recall it, but many others that make it an even more important manifestation.

Usually, in the prior days, the centre is filled with many food and wine stands of the various local associations. The Red Cross, the Remiera, the Arilica Basket, the Alpini group and the Scout group and many other volunteers. You will also find the Sub Group inside and the Austrain Polveriera, that opens to the public for the occasion. It’s located just under the Feltrin Bastion.

Everyone brings their own specialties, and believe me, it’s really difficult to choose, because everyone is good at what they do. You can find from the classic Risotto al Tastasal and Bigoli with Sardines, to the delicious Arrosticini up to the Sandwich with Porchetta and Polenta as a side…

To warm you up, I suggest you take a nice glass of Vin Brulè right away. The must, however, is buying a bag of chestnuts and of Fogassin, to taste walking through the market. If you’re wondering what the Fogassin is, simply imagine a pastry with oil with a salty aftertaste, crispy on the outside and soft on the inside. As a real arilicense, I tasted it as a child and from there I fell in love. I even forced my parents to bake a birthday cake made only out of Fogassin!

Anyhow, I can’t dedicate it a whole paragraph, so let’s go on. There’s a particular event that happens in only one of the places to visit on the Garda Lake… That is exactly in Peschiera.

CELEBRATION OF ST. MARTINO IN PESCHIERA DEL GARDA AND THE FIRE OF THE VOLTONI

On the evening of the 11th of November, after the Solemn Mass in St Martino church, happens something that occurs only one time a year. The people begin to reunite on the sides of the Middle Canal, the traffic stops… Everyone turns their gaze to the symbol of the antique Arilica: the Voltoni Bridge. This sixteenth-century work will, in fact, by-and-by become the background for an incredible firework display. I’m not exaggerating when I say that the whole lake is envious of our famous Fire of the Voltoni.

The fireworks will firstly light up the dark with their colours, then, little by little, the atmosphere will become more romantic. A slower soundtrack will start, and after a few lights come on at the edge of the bridge, the magic begins. A golden waterfall will begin to gently cascade over the water below, leaving you speechless. I will have seen this spectacle more than ten times, but it always amazes me as if it was the first.

But it doesn’t end there. As I said, in one of the oldest places to visit on Lake Garda, the festival lasts several days.

Traditionally, a Voga Veneta competition is held, called precisely the ‘Palio di San Martino’. This year, to be precise, it is the 15th edition of the competition, which takes place along the canal. The prize-giving ceremonies are then solemnly accompanied by the symphonies of the Banda Musicale Cittadina. In addition, a charity fishery is organized every year.

However, in addition to these initiatives, something unprecedented is always organized… Therefore, as soon as the detailed program is published, I will post it here, so you can view all the events of this edition.

CELEBRATION OF ST MARTINO 2022: THE PROGRAMME

As promised, below there is the updated programme for the 2022 edition!

On Friday, 11th of November, from 10:00 a.m to midnight, the food stands will be open. You can find them in the square in front of the main harbour. Meanwhile, the Diving Club stand will be located inside the ancient Austrian Polveriera. At first, from 11:00 a.m., some boat tours around the Fortress are scheduled…By the way, we will talk about this later! Secondly, at 6:30 p.m., people attend the Holy Mass of the Saint, inside the St. Martino Church placed in Ferdinando di Savoia Square. To end on a high note, at 7:30 p.m., the wonderful fireworks and the Fire of the Voltoni Bridge.

On Saturday the 12th, from 10:00 a.m. to 00:00 p.m. the food stands will be open again, to taste our typical gastronomy. Then, from 11:00 a.m. boat tours around the Walls will be held again. Furthermore, in the afternoon, the Voga Veneta competition, called “Palio di San Martino”, takes place specifically at 3:30 p.m.  On the last day, the 13th of November, the stands will be open only until 10:00 p.m. Anyway, like the previous days, from 11.00 a.m. there will be boat tours along the canals of the Fortress.

Just for the occasion, there is the chance to visit our museums: the Fishing Museum and the Historical Museum, called precisely “Palazzina Storica”. Moreover, in the Palazzina’s garden there will be a special child experience to enjoy, the “Battesimo della Sella”. Basically, it means for them to try to ride a horse for the first time! In conclusion, to have some fun, a roller rink will be set up in Betteloni Square, in front of the townhall.

We will discuss about the best activities in a few seconds… In the meantime, I will reveal two curiosities about the Patron Saint of this place to visit on Lake Garda.

St. Martin de Tours was a pagan soldier who converted to Christianity. Particularly, there is a famous episode in which his faith will be defined forever. In fact, even if it was forbidden, he donated his cloak to a poor beggar. This is the reason why he is not only recognized as a Saint, but also as the Patron of soldiers and, indeed, of beggars.

On 11th of November, the celebration is all about him…But there is more! Probably you don’t know that there is an original idiom in my town, for these days. In Italian, it is said “Fare San Martino”: literally, in English, “To do the St Martino thing”. The meaning is to move out from a certain place. In the past, farmers used to choose this period to change their farmhouse, after finishing their previous work. In fact, at that time, the days were warmer, making it less tiring to move. Their job was usually only for a year. Then, they had to find another landowner.

PESCHIERA WALKING TOUR AND TOUR OF THE WALLS

The celebration of St. Martino in Peschiera del Garda is also an opportunity to rediscover the history enclosed within its walls. Even though I have lived there all my life, I think it is always fascinating to take a journey back in time. History always has something to teach us and always finds a way to surprise us.

Guided tours of the Fortress, now a UNESCO World Heritage Site, are specially organized on these festive days. Do you prefer to walk and listen to the call of the past or sail through the waves in an authentic autumn atmosphere? You’re in luck, because even if you can’t choose, you can always opt for both.

Let’s start with the Tour of the Fortress Walls. On a small boat you will explore the surrounding canals, appreciating the imposing pentagonal Venetian structure from the outside. The boat excursion is open to anyone, but free for residents, departing from San Marco’s Square.

The other alternative to venture into the streets of one of the places to visit on Lake Garda is the Peschiera Walking Tour.

Are you planning to come as a group to the area for the San Martino festival? Or will you come alone? Either way, the Peschiera Walking Tour is a guided tour for everyone, no-one excluded. You will set off in the company of a local guide from the town’s main square, Piazzale Betteloni. Here, you will first learn the meaning of a new word, which I have actually already used several times in this text…

Next, the tour will begin, revealing many unpublished curiosities of Peschiera. Strolling through the streets of the old town, you will see the various Bastions of the Fortress and even climb up one of them, enjoying the view. You will pass by the Austrian Palleria, the Officers’ Pavilion and the very important Palazzina Storica. Here, on 8 November 1917, the Conference between the King of Italy Victor Emmanuel and the British and French allied forces took place. A decisive episode in defining the fate of the Great War.

If you would like to take part in the tours, have more information or any other clarification, you can come to us at the Infopoint, contact us or write us an e-mail. You will find us at Piazzale Betteloni n. 15, in the old town centre.

Anyway, I hope I have conveyed to you just how special the celebration of St Martino in Peschiera del Garda is. If you also live here or if you have ever come during this period, you will know it very well how much warms your heart. If you did not know it or had not had the chance to come, you now have no excuse. I am waiting for you in my Arilica, where simplicity has always been the key that makes it unique and different from any other town. 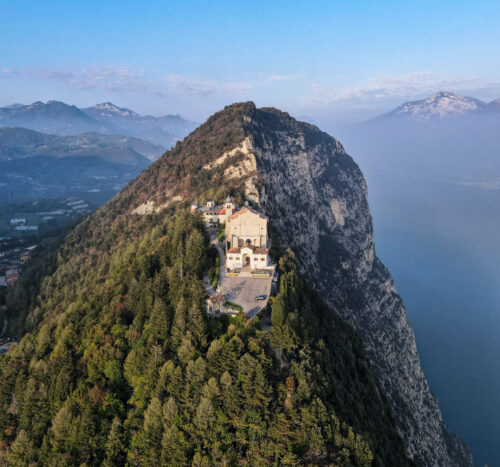 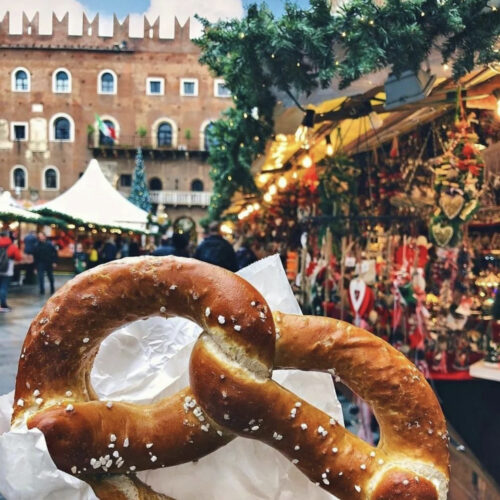